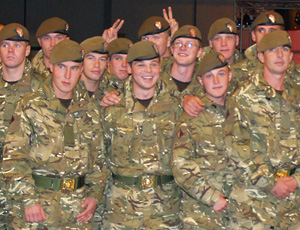 Cheshire Based specialist fastener and fixings distributor Rapierstar Limited honoured the return from Afghanistan of the 1st Battalion Mercian (Cheshire) Regiment by providing the venue for a homecoming party for the returning heroes.

Rapierstar were in the unique position to salute the battle hardened 'Cheshires' and show their support by hosting over 1,000 soldiers and civic dignitaries within their recently purchased extensive 90,000 sq ft distribution warehouse and head office near Congleton.

The Battalion had earlier proudly marched through the town of Congleton with fixed bayonets, band playing and colours flying to the delight of crowds of union flag waving people. The soldiers were then presented with the Afghanistan Medal at a ceremony outside the town hall before moving on to the Rapierstar party venue.

"The bravery and dedication of the troops has been inspirational" stated Rapierstar Managing Director David Furness "They have been separated from their loved ones performing a very difficult task, we also have to remember the 12 soldiers who lost their lives in Afghanistan, and more than 60 who were injured", he added "we are proud to support the Mercians in this way".

The battalion's commanding officer Lieutenant Colonel Andy Hadfield, aged 42, from Lichfield, said: "The march in Congleton was phenomenal. We expected something big but this has been amazing. Congleton has a special place in our hearts."

The soldiers and dignitaries enjoyed entertainment, a bar and food prepared by the Royal Irish Catering Corp well into the evening.