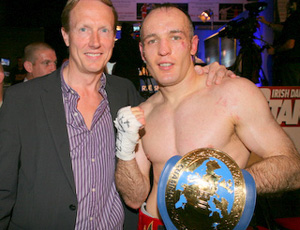 Specialist fastener and fixings distributor Rapierstar have teamed up with European Boxing Champion Brian Magee, supporting him in the latest defence of his European super-middleweight belt in Dublin.

The 35-year-old from Belfast dominated his Armenian opponent, Roman Aramian, from the start in an impressive display.

With Rapierstar's policy of providing superior fixings, huge stock levels and a total customer focus, "Brian epitomises the positive attitude that our company strives to maintain, "Managing Director David Furness stated, "He is dedicated, professionally prepared and sets himself new and challenging targets".

Boxing is one of the fastest growing sports in the UK and Magee now wants a world title fight against current super-middleweight champion Dimitri Sartison of Germany. "I'm number one in the division and hopefully now I've put myself in a position to get it," he said.

"Brian is not only a great fighter but a down to Earth guy, He recently played for a RapierStar golf team which was in aid of a locally based Cancer charity", added Rapierstar's Ireland sales manager Paul McAuley.

With Brian in their corner, Rapierstar are fighting fit and going from strength to strength, with their knockout range of fasteners and fixings.